Mass Times at St. Julie Billiart Parish are as follows: 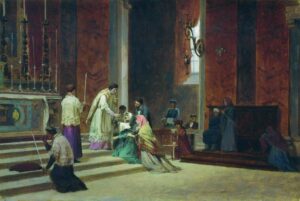 The Holy Sacrifice of the Mass is the principal act of worship of the Catholic Church.  The Mass consists of two solemn parts: the Liturgy of the Word, in which we draw closer to Christ by hearing the Word of God in Sacred Scripture, and the Liturgy of the Eucharist, in which the grace of Christ comes to dwell in those who partake worthily of the Body of Christ in Holy Communion.  The term “Mass” comes from the Latin word missio meaning “sending,” which indicates that those who participate earnestly in the Mass, both in word and sacrament, are sent out into the world to be the light of the world.  The Holy Mass is the most ancient form of Sunday Christian worship.  There exists no substitute for it.  In the Holy Mass we commemorate the suffering and death of Jesus Christ as a memorial but also as a true spiritual reality occurring in the present on the sacred altar.  The Church calls the Holy Eucharist, “the source and summit of the Christian life.”  And so it is to all who believe in what Christ Himself taught to His disciples while personally present on earth.

Here is an ancient description of the celebration of the Eucharist by the first Christians:

“On Sunday we have a common assembly of all our members, whether they live in the city or the outlying districts. The recollections of the apostles or the writings of the prophets are read, as long as there is time. When the reader has finished, the president of the assembly speaks to us; he urges everyone to imitate the examples of virtue we have heard in the readings. Then we all stand up together and pray.

On the conclusion of our prayer, bread and wine and water are brought forward. The president offers prayers and gives thanks to the best of his ability, and the people give assent by saying, ‘Amen.’ The eucharist is distributed, everyone present communicates, and the deacons take it to those who are absent.

The wealthy, if they wish, may make a contribution, and they themselves decide the amount. The collection is placed in the custody of the president, who uses it to help the orphans and widows and all who for any reason are in distress, whether because they are sick, in prison, or away from home. In a word, he takes care of all who are in need.

We hold our common assembly on Sunday because it is the first day of the week, the day on which God put darkness and chaos to flight and created the world, and because on that same day our saviour Jesus Christ rose from the dead. For he was crucified on Friday and on Sunday he appeared to his apostles and disciples and taught them the things that we have passed on for your consideration.”  (From the First Apology in defense of the Christians by Saint Justin, martyr)